A trip to Germany just isn’t complete without sampling a sausage or two, and yes we’re very aware of the obvious euphemisms here. Whilst the rest of the world aren’t strangers to a tasty sausage or two…it’s the Germans that really step it up a notch with their variety and enthusiasm. We spent the weekend in Hamburg and simply had to start our German coverage with the dish described by our hosts as a ‘tradition, cult, and taste’ all in one… 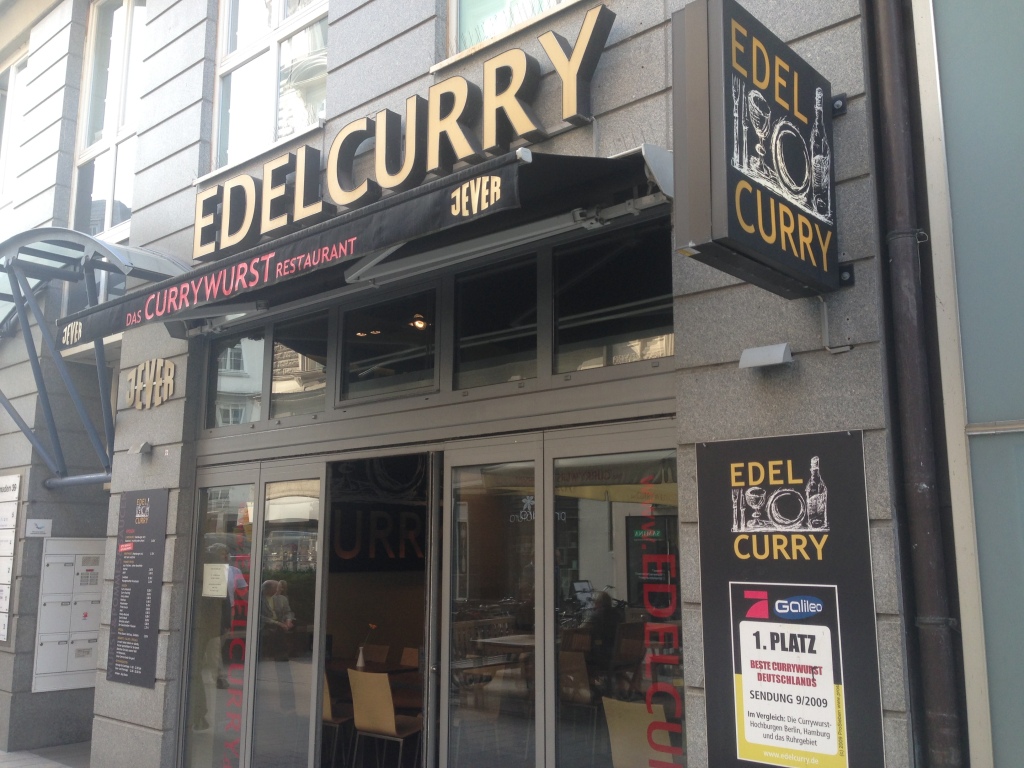 The Joint: Edelcurry, Colonnaden 39, 20354 Hamburg, Germany. You can find their website here.

The Vibe: Edelcurry is a short walk from both the Binnenalster, the smaller of Hamburg’s artificial lakes and a hub of tourist activity, and the popular urban park of Planten un Blomen. It’s a great stopping point as you walk through one of Germany’s more picturesque city centres. The relatively young restaurant prides itself on being more than just fast food, considering itself a gourmet experience, and we take advantage of their well kept boulevard seating area and dine alfresco on this occasion. We order the Currywurst mit klassischer (‘with classic sauce’), a side order of Bratwurst, and wash it down with the local Kritz-Kola.

Currywurst is a simple but hugely effective dish. Take a steamed and then grilled Bratwurst sausage, cover it in a tomato-based sauce, and then sprinkle your choice of curry powder and spices to add the taste. It’s served over 800 million times each year in Germany and Edelcurry boasts awards for being amongst the best in the land.

Our sausage arrives in no time and it’s sent with a generous covering of sauce and thin cuts of local bread. The sauce is fruity, light, and has just enough spice to bring a tingle to your lips. Much like a standard curry the strength is all down to the powder used and we, rather unadventurously, sit on the milder side of the spectrum.

The side order of bratwurst was a nice bite too. If we’re honest though, we’ve yet to eat a bad sausage in any city in Germany and Edelcurry certainly weren’t going to buck that trend.

Currywurst is one of those dishes that tastes far more appealing than it looks and that’s no different wherever it’s served. It’s striking, even interesting at first glance, but lacks that ‘wow’ factor of a well-assembled burger or pizza. Don’t let that put you off though, Edelcurry is a great introduction to a rich tradition and a tasty stop off as you wander through Hamburg.

Edelcurry was visited by Tom in September 2014.

This is our first review in Germany but check back soon for more from Hamburg.